Gail Collins: Bret, we’re living through a time of extreme crisis: a sitting president refusing to acknowledge his re-election defeat. But when we look back I have a feeling our sharpest memory will be Rudy Giuliani’s melting hairline.

Hoping that now you will tell me I’m too shallow …

Bret Stephens: Not at all, Gail. It was like an outtake from a “Borat” movie, sans Borat. It was “The Picture of Dorian Gray,” minus Dorian Gray. It was the Wicked Witch of the West, melting under a bucket of flop sweat.

Bret: Actually, it was a perfect sequel to the press conference fiasco at the Four Seasons Total Landscaping in Philly — you know, the one between the sex shop and the crematory. That one betrayed the comic incompetence of the Trump legal operation. This one poetically exposes its inner corruption. In a way, I think Giuliani is doing the country an unwitting service by turning a vile conspiracy theory into a national punchline.

Or am I underestimating the damage he’s doing?

Gail: No, I’m going for the public service theory. The great danger in all this was that Donald Trump could somehow convince a large part of the nation to ignore the real election results and keep him in power.

Bret: He’s succeeding better in bamboozling his base than he is in holding on to power.

Gail: If you want to promote a national election fraud crisis, it’s much harder to maintain the right pitch when your most famous minion is running around like a low-IQ, seemingly intoxicated Darth Vader.

Bret: Speaking of Drunk Vader, I suggest our readers take a two-minute mental health break (after reading the rest of this conversation, of course) and watch Eddie Izzard’s “Death Star Canteen” routine. Sorry, go ahead.

Gail: Beyond the Rudy Follies, what do you think is next?

Bret: Trump will never, ever concede. He’s congenitally, psychologically, morally, intellectually incapable of it. It goes against his brand identity as the ultimate, if only self-declared, “winner.” And, in a perverse sense, it serves him well. It means he holds on to his millions of die-hard fans, who’ll provide a base of political support inside the G.O.P. and a huge audience for any media venture he might launch. Hard not to notice Fox News squirming in the face of the Trumpian furies they did so much to stoke, just because they have more-or-less acknowledged that Biden won the election.

Gail: So Trump’s going to stay the star of his new storyline, in which the rightful president is ripped away from his post by sinister ballot-box-stuffing scoundrels.

Gail: And then rallies his loyal minions to freeze the opposition out of Washington.

Bret: If temperatures are subzero on Inauguration Day, maybe the loyal minions will be frozen out of Washington.

Gail: And do you agree that in this scenario, Joe Biden winds up looking like the romantic hero?

Bret: I’m thinking of Biden as the guy in the corner booth at the bar, drinking black coffee and reading a well-thumbed copy of “The Cider House Rules” till the bar closes, so he can drive everyone home safely. Meantime, he seems to be on the cusp of naming his cabinet. Any hopes, fears or predictions?

Gail: Well you know I’d love to see Elizabeth Warren get Treasury Secretary. But it’s hard to imagine Biden leaping into that battle with a Senate he doesn’t control. Unless the Democrats miraculously win two Senate runoff elections in Georgia.

Bret: I wouldn’t put the Georgia races out of Democratic reach given that Biden flipped the state to blue.

Gail: Guess you’re right. And I love that you’re more optimistic about the Democrats’ prospects than I am.

Bret: As for Warren, don’t forget that Charlie Baker, the Massachusetts governor, is a Republican, meaning he’d appoint a successor who would serve at least until a special election is held sometime in the middle of next year.

I guess what I’m saying is that “Secretary Warren” is probably a ways off.

Gail: Yeah, and maybe that goes for all the well-known progressives. Even if Georgia does give the Democrats two wins, every single Democratic senator in Washington will need to stand together 24/7, or send the whole party agenda crashing.

Can you imagine the drama? Especially if we’re all still sheltering from Covid-19 and have nothing else to do but fantasize about … Senate Committee Chairs. They’ll be cranking out HBO dramatic specials on the infrastructure priority list.

Bret: Great. It’ll be like Game of Thrones for the unattractive set.

Gail: The other possibility is that the Senate never gets a Democratic majority, nothing big ever gets done and the nation falls into despair.

Tell me there’s still another scenario.

Bret: I know we’ll disagree on this, but I think Biden’s presidency will be well served by a narrowly divided Congress, both in the House and the Senate. He won’t have to waste time getting into arguments with progressives about packing the Supreme Court with extra justices or making D.C. and Puerto Rico the 51st and 52nd states.

Gail: Those of us who are still gnashing our teeth over Mitch McConnell’s court-packing treachery wouldn’t mind seeing Republicans get a little threatened on that front.

Bret: I’ll bet Biden will focus on an ambitious, centrist and politically achievable agenda of Covid relief, national policing standards, comprehensive immigration reform, infrastructure investment and shoring up the Affordable Care Act. Maybe he can extend a political olive branch to moderate Republicans by naming someone like Larry Hogan, Maryland’s popular and brave NeverTrump governor, to a cabinet job. None of this is going to de-crazify the G.O.P., but Biden’s job is to show he can get actual stuff done for the American people and bleed some of the rancor out of politics.

Gail: Your olive branch scenario seems pretty surefire. The cabinet is very important, but it’s got plenty of places where you can stuff a Republican or two without undermining your central agenda. 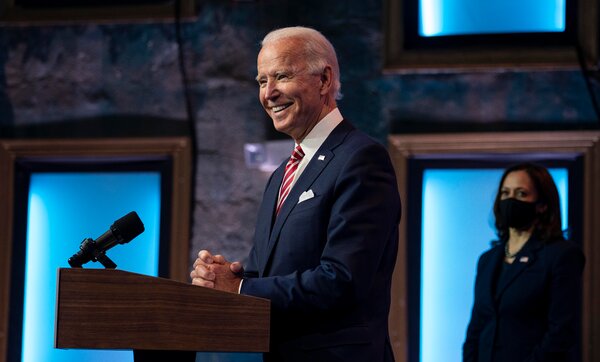 Bret: Hogan would be great as U.S. trade representative, in case anyone on the Biden transition team is reading this.

The president-elect will also have his hands full convincing our allies that the Trump period was an aberration, a period when the global superpower went on a bender but is now back on the wagon for good. One of the silver linings of the past four years is that more of us are on the same page regarding the danger posed by Vladimir Putin to the free world, the need to strengthen NATO and the importance of not coddling dictators like Pyongyang’s most infamous (and possibly only) gourmand. And Biden can also craft a serious bipartisan approach to China that aims to punish Beijing for its human-rights abuses against the Uighurs, its international treaty violations in Hong Kong and the South China Sea, and its global intellectual property theft — and do so without stumbling into another trade war or, God forbid, a hot war.

Gail: As we keep saying, the new president wins just by being sane.

Bret: It actually beats agreeing that Donald Trump is the Marianas Trench of all presidencies.

Gail: We knew we’d get here at some point — after all our conversational solidarity about the awfulness of Donald Trump, we’re not going to agree about the Biden agenda or the desirability of a Democratic Senate.

But it’s comforting to know we can always relax over Thanksgiving dinner with a vision of Rudy Giuliani’s melting hair to bring us together.

The Times is committed to publishing a diversity of letters to the editor. We’d like to hear what you think about this or any of our articles. Here are some tips. And here’s our email: letters@nytimes.com.