[Want to get New York Today by email? Here’s the sign-up.]

Weather: Gusty all day, with early rain followed by clearing skies. High around 60 is in the morning, but it’ll drop off to the mid-40s by evening. 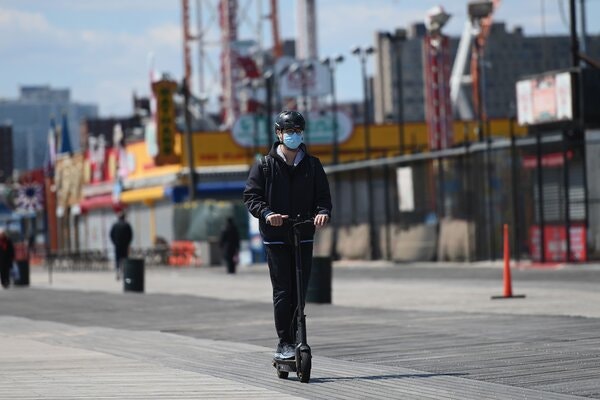 Pedestrians might begin to see a surge in two-wheeled riders swerving down the streets of New York City.

Starting today, electric scooters are now officially legal as New York finally joins other cities across the nation in embracing the transit trend. Fans of the scooters say they are a cheap way to travel. But other New Yorkers view them as a nuisance or worry about the potential danger they pose.

Here’s what you need to know about the end of the ban:

The new law, which was passed in the summer and went into effect today, means riders across New York City can use their own electric scooters and throttle-controlled electric bicycles, which do not require pedaling. So-called pedal-assist electric bicycles and electric vehicles classified as mopeds, like those rented through Revel, were already permitted.

After the pandemic began, some lawmakers in New York said there was an increased urgency to act on ending the ban to ease anxieties for those using the electric two-wheeled vehicles to travel to work.

“It couldn’t come at a better time during this Covid era,” Councilman Fernando Cabrera, who sponsored the measure, said in a recent interview. “The world is recognizing that we have a new, alternative mode of transportation. For essential workers especially, they’re going to feel more comfortable now.”

Electric scooters have taken off in dozens of cities, including San Francisco, Atlanta and Washington, over the past three years. In New Jersey, the devices became legal last year and flooded the streets of Hoboken — quickly drawing criticism about the recklessness of some riders.

In 2019, the New York Police Department issued more than 1,100 summonses related to the use of electric bicycles and scooters. But some groups, including the largely immigrant force of delivery workers, still used them, and earlier this year Mayor Bill de Blasio directed the police to suspend enforcement as demand for deliveries surged during the pandemic.

Lawmakers in New York were long reluctant to formally end the ban, with some worrying that the vehicles would be too dangerous in a city that before the pandemic was incredibly congested. Gov. Andrew M. Cuomo vetoed a bill last December that would have legalized them, because certain safety measures were not required.

A study of scooter accidents in Austin, Texas, last year found that nearly half of the 190 riders injured there had suffered head injuries. At two hospitals in Southern California, another study found, the vehicles left 249 people in emergency rooms over a one-year period.

Still, the study in Austin found that many of the injuries could have been prevented if the riders had worn helmets and had taken more precautions. The report also called for additional training, since a majority of the wounded riders were relatively new to using the devices.

A pilot program for shared electric scooters is planned to start by May. The program, which is to last no more than two years, will exclude Manhattan and prioritize neighborhoods without myriad transit options, though details are still in the works.

Still, several app-based rental companies, including Bird, Lime and Spin — some of which spent hundreds of thousands on lobbying for the devices — are already hoping to form roots in one of the few untapped large markets.

“This is something that has become an essential service in so many communities, and we hope to see the same in New York,” said Maurice Henderson, a senior director of government partnerships at Bird.

New York City Hit a 3% Positive Test Rate. Or Did It?

Nail Salons, Lifeline for Immigrants, Have Lost Half Their Business

Arthur Imperatore, Founder of a Critical Ferry Service, Dies at 95

Hospitals across New York City are stockpiling protective gear and other supplies as staff members brace for a second wave. [The City]

A man was under the influence of alcohol and driving over 95 m.p.h when he crashed into the car of a hospital worker and killed him, according to prosecutors. [Daily News]

Columbia University banned dozens of students from campus for traveling to Turks and Caicos Islands in violation of the school’s safety policies. [CNN]

So you’ve canceled your Thanksgiving travel plans and created a scaled-back, family-only holiday menu. Now you just need to tackle the food shopping.

The crush of grocery store shoppers in the days leading up to Thanksgiving can be maddening in the best of times, but it’s especially stressful this year as New York City is in the grips of a second wave. The good news is that there’s no evidence that grocery shopping has led to large outbreaks or a significant amount of transmission, said Linsey Marr, an aerosol scientist at Virginia Tech.

Dr. Marr, other public health experts and store officials shared some similar advice about the safest way to shop amid a new wave of infections.

The bottom line: Wear a well-fitting mask the entire time, avoid close contact with other shoppers and keep the trip short. Many experts also said that avoiding crowds lowers your risk. Grocery stores are often least crowded early on Monday mornings. During a typical Thanksgiving week, Wednesday is the busiest shopping day.

Shopping carts are germy during the best of times, but it’s not essential to clean the cart if you’re careful about not touching your face and washing your hands. Gloves are also not recommended or necessary if you wash your hands after shopping.

And as for whether to clean off groceries: “If it makes you feel better, there’s nothing wrong with doing a quick wipe-down with a soapy rag,” said Dr. Asaf Bitton, the executive director of the Boston-based Ariadne Labs, a joint center of Brigham and Women’s Hospital and the Harvard T.H. Chan School of Public Health. “The key thing that is necessary is that you wash your hands, really, really well.” 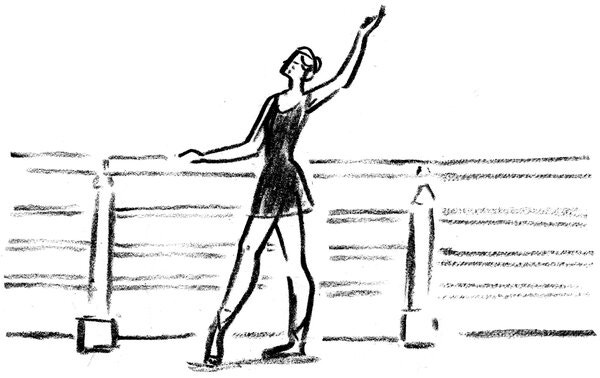 I was on my sunset walk when I came upon a gorgeous ballerina in her mid-60s performing a barre routine at the water’s edge. She had an impeccably sculpted figure and a silver French twist.

I watched in awe, aware of how attuned, patient, and gloriously ravenous I was for honest, heartfelt, live performance.

The woman’s grace evoked an exquisite romanticism, and she commanded attention as though she were a principal dancer on the Lincoln Center stage.

When she had finished and slipped back into her shoes, I approached her.

“Your dancing was sensational and I wanted to say thank you,” I said. “You’re stunning and completely made my day.”

Her face lit up.

“Thank you for saying so,” she replied.

New York Today is published weekdays around 6 a.m. Sign up here to get it by email. You can also find it at nytoday.com.

What would you like to see more (or less) of? Email us: nytoday@nytimes.com.